Montignac’s history is linked with the “History of Mankind” as a matter of fact, Montignac was settled as of the paleolithic area, then it was colonized by the Romans as testified by the Villa des Olivoux in Chambon and Brenac. From this rich period, Montignac has inherited the world famous cave of LASCAUX, discovered in September 1940 and the Régourdou.

Its feudal castle already existed in the beginning of the Middle Ages and until the 10th century; it became by marriage (11th century) one possession of the Count of Perigord, and then became an important fortified town. The last counts: Archambaud V and VI who had been unfaithful to the King were thus deprived of all properties by the Paris Parliament. Montignac then became one property of Louis d’Orléans, brother of French King Charles VI. Charles VI was taken prisoner during the battle of Azincourt and decided to sell the town to Jean de Blois in order to pay his ransom. By marriage, the castle and town then became a property of the D’Albret family until 1603, when French King Henry IV gave them to François d’Hautefort Lord of Thenon. The castle has been many times dismantled during wars, and it was destroyed in 1825. Only one tower and its infrastructure bear witness of its former glory. 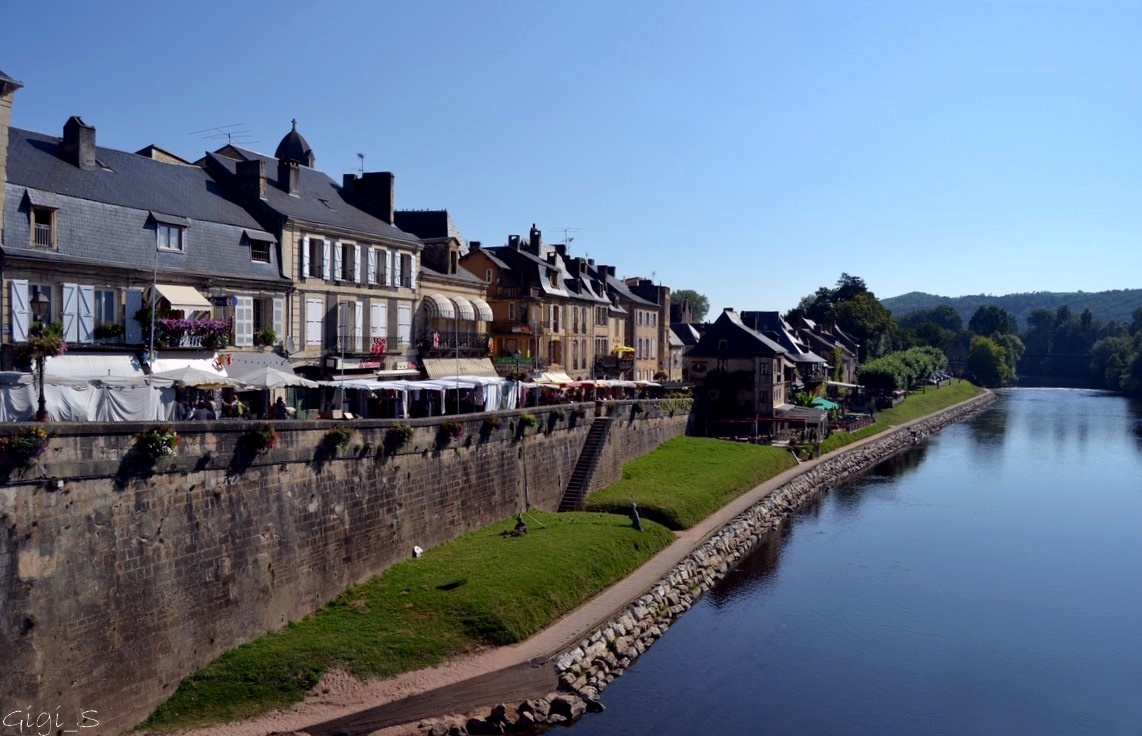 The town used to be surrounded by a wall with three doors, of which one led to a wood bridge across the river Vézère (today facing the Pègerie street). This bridge was burnt in 1580 by protestants, then it has been rebuilt, and was carried away by the 1620 flood. A new bridge was built between 1766 and 1777 to replace the ferry that had been used for 150 years.
This charming town includes two different areas located on both sides of the Vézère river: on the right bank, the feudal town and its medieval narrow streets with their 14th, 15th and 16th century architecture: houses on piles, half-timbered houses, wash houses and springs, the typical yellow stones of which beautifully reflect the sun. On the left bank, the suburb with the convent and priory reminds us that Montignac used to be a harbour, a place of commerce and crafts during the Ancien Régime period.

Hospitality remains the number one tradition of its inhabitants (3,101 today). In Montignac many celebrities were born, such has Eugène LE ROY, writer and author of «Jacquou Le Croquant», Joseph Joubert the moralist, or Pierre Lachambaudie, writer of tales…

Montignac, is also a place for gastronomy: the Lascaux cake is wonderful, and when you’re here it is as if you could smell the delicate aroma of King Henri IV’ “Poule au Pot”. When you come to Montignac, our tables d’hôtes and restaurants lead you to discover the numerous delicious recipes of our Perigord. But this is not the end of it!

Montignac and its area offer varied hiking paths, leisure activities and sites to be visited, of which, do not miss Lascaux II, the Regourdou, the Thot-Espace CroMagnon, the castles of Losse, and Sauveboeuf, theSaint-Amand de Coly Abbey, the shelters of La Roque Saint Christophe, the Paleontology museum and the Dinosaurs’ Park!

Ferme de Tayac is just a 2 min. drive or a 20 min walk to the National Prehistoric Museum – www.fermedetayac.com