On the left bank of the Beune River, a group of caves are located at the opening of the small Combarelles Valley. The entrance to the Les Combarelles Caves is located on the right side of the departmental road 47, 2 kilometers after the village of Les Eyzies in the direction of Sarlat.

The environment of the cave consists essentially of agricultural lots in front, surrounded by a dense tree cover. In order to preserve the natural landscape, there is no picnic area in close proximity. There is, however, a gravel parking lot around 100 meters from the cave entrance.

Just next to Les Combarelles, Rey Cave, excavated by Emile Rivière, yielded a magnificent decorated spatula made from reindeer antler. 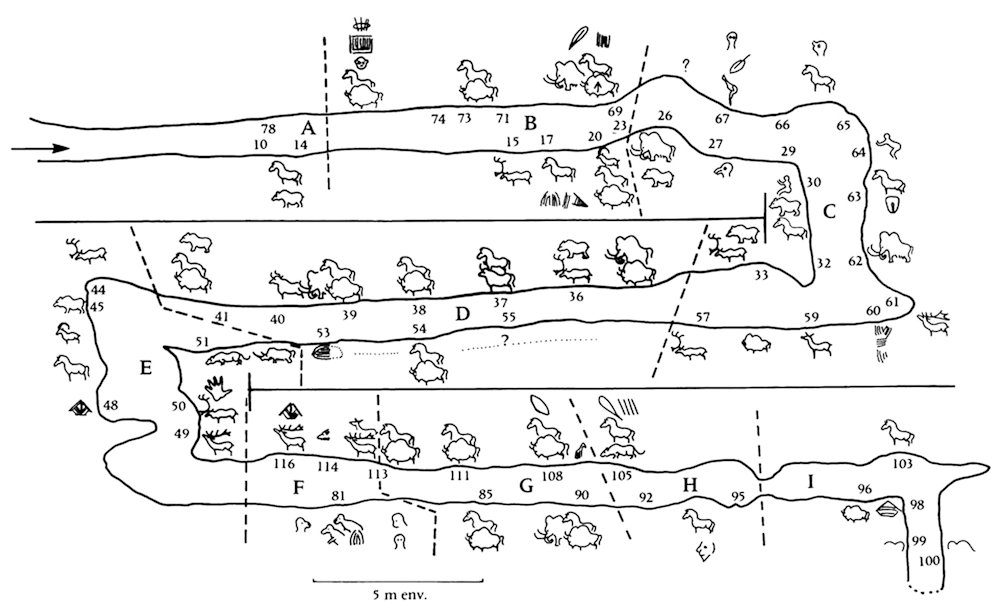 Around 50 meters further up the valley, the two Les Combarelles caves open into one wide entrance on a ledge around 10 meters above the current valley bottom. Les Combarelles I is open to the public, Les Combarelles II is closed.
There is a free parking lot very close to the welcome center. Guided visits must be reserved ahead of time at the ticket office of Font de Gaume cave.
Discovered in 1901 by Louis Capitain Henri Breuil and Denis Peyrony, the engravings of Les Combarelles Cave made a major contribution to the acceptance of parietal art. Along with those of Font-de-Gaume Cave, discovered just a few days later, and those of La Mouthe, known since 1895, the parietal works of Les Combarelles convinced researchers who until then did not believe that prehistoric humans had the mental and technical capacities necessary to realize them.

The entrance of the cavity was long used as a stable by peasants who found many Magdalenian flint and antler artifacts. But at the time, their interest was not recognized and the stratigraphy of the site remained unstudied.

The enthusiasm of Prehistorians concerning the engravings, on the other hand, lifted the site to its rightful place as one of the most beautiful decorated caves known. Henri Breuil even referred to this discovery as “(.) an enormous firecracker in the world of prehistory”.

Les Combarelles I has belonged to the State since its discovery. It is classified as historic monument and is open to the public. To accommodate visitors, the floor of the cave, was lowered and covered with a metal walkway. The lighting is dim and Plexiglas covers protect some of the figures from rubbing. Due to the fragility of the walls and natural alterations such as calcite deposits, it is necessary to limit the number of persons to 6 per visit. Les Combarelles II is closed to the public.

The innermost part of the cave is covered with engravings from the Magdalenian period (about 12,000 years ago). Drawn over a period of 2000 years, many are superimposed one upon another, and include horses, reindeer, mammoths and stylized human figures – among the finest are the heads of a horse and a lioness.

Ferme de Tayac is just a 3 min. drive or a 25 min walk to Les Combarelles- www.fermedetayac.com