Surrounded by wooded hills, built on the right bank of a bend in the river Vézère, the welcoming little town of Le Bugue, with it’s 3,000 inhabitants, is one of the main localities in the Périgord Noir. Situated as it is at the crossroads of the Périgord, Le Bugue dominates the southern entrance of the Vézère valley.
Le Bugue offers numerous possibilities to holiday makers: modern sports facilities, excellent restaurants, interesting and unusual sites to visit, which, added to the 18th century architecture and the beautiful setting, make Le Bugue a rich destination for all types of holiday. 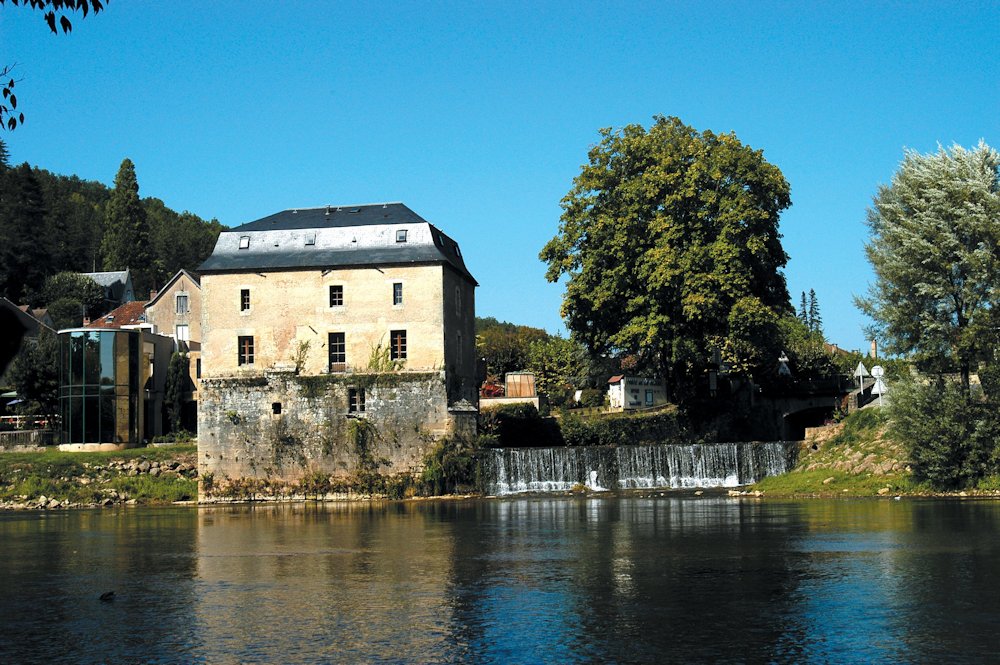 The town was completely transformed during the 19th century and in 1857, one of its own inhabitants, Léon Dessailles, an archivist and historian published its history. The little town was totally rebuilt, huddled around its churches of St. Marcel and St. Sulpice, and its convent situated just a little way down from the current bridge. Le Bugue is the home of the largest private aquarium in Europe, Canoe trips along the Vézére in summer, and some truely excellent restaurants.
Just on the ourskirts of the town they have constructed a living replica of a typical 19th century French village. Le Village du Bournat is unique, here you will find every day life and objects from a bygone age. Local craftsmen are on hand to demonstrate the dying arts and ancient skills of the Blacksmith, Tanner and Basket Weaver to name a few. A working farm with its ancient tools and implements, a School House with authentic furniture and toys, many of which are there to be played with, the church with its wedding in progress, the Walnut Oil Mill and the Still are all here, a whole microcosm of the French countyside as it was 100 years ago.

There are a number of Pre-Historic sites in and around Le Bugue which are open to the public. One kilometre to the north-west, we find Bara-Bahau cave. discovered in 1951 by the speleologist Norbert Casteret. In this 100 m long cavity formed from the soft crumbly rock – Father Glory compared to cream cheese – prehistoric artists engraved mysterious signs and outlines of aurochs, bears, bison, ibexes and horses with fingers, flint or sticks. The highly rustic style of these works make then difficult to date; they are probably from the ancient Magdalenian era ( 15,000 years B.C. ).
Three kilometres to the south you will find the Gouffre de Proumeyssac. It has been described as a “crystal lighthouse on the edge of a vanished ocean”. It is a vast limestone cavern almost 50 metres high, a large number of translucent stalactites which are still alive, thanks to a passing stream. “One of the finest showcases of underground France”, according to Norbert Casteret, Proumeyssac is a must for any visitor to the Périgord. With the remarkable efforts made by the owners to develop the site, you will not forget the experience of descending the chasm, from the summit, in a fragile basket.

Four kilometres to the east, the little village of Saint-Cirq has a prehistoric cave which features a representation of a full, human face. The Sorcier Cave or Sorcerer’s Cave as it is known, has a few dozen very fine engravings, including a dapple grey horse and a male figure with a complete human face. His particularly expressive features make him one of the most perfect wall engravings of humans ever found.

Market day in Le Bugue is on Tuesday when the whole town comes alive with the vibrant colours and smells of the local produce that is on display. This has become one of the best markets in the region. Here you can buy anything from a lawn mower to freshly cooked Paella and what better past time than to sit in one of the many cafès with a glass of wine or a “Chocolat Chaud” and watch the world go by.