Laugerie Basse’s Prehistory dates back 15,000 years, but its History dates  back only 130 years, precisely 1863, when Edouard Lartet, an eminent  paleontologist, arrived in Les Eyzies with his English friend and patron Henry  Christie. They had come to visit the so-called “Richard cave” in Les Eyzies but  were taken to other sites of the Vézère valley. Laugerie Basse and its  prehistoric remains came up to their expectations.

Also in 1863, Marquis Paul de Vibraye, an archaeologist who also started  searching Laugerie Basse, and the finder (1864) of the now famous “Immodest  Venus of Laugerie Basse”, the first feminine statuette to be found in France  came to Les Eyzies. In 1865, Elie Massénat succeeded the first 3 researchers and  launched a 20-year long excavation campaign with Léonard Delpeyrat, an  inhabitant of the neighbouring hamlet.

All excavated pieces were published in 1900. 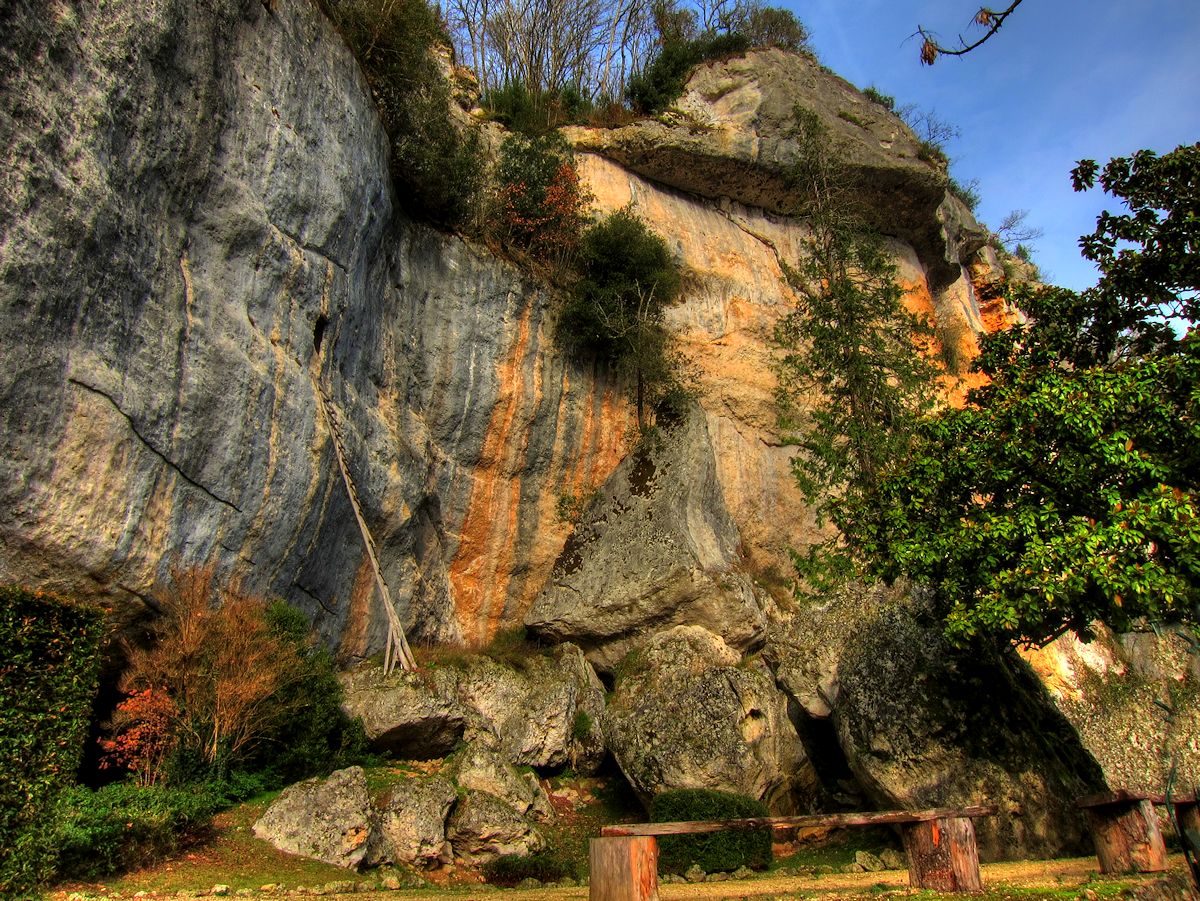 The beginning of the XX century was marked by the threatening arrival from  Bern of the Swiss Otto Hauser, all his discoveries were directly sent abroad to  the detriment of Science. Fortunately, in 1913, Laugerie Basse was sold to  Achille Le Bel, an eminent chemist, and Jean Maury became head of the excavation  team: at last Laugerie Basse was saved from this dangerous foreign hold. Most  of the work done during the following 3 years related to the Marseilles shelter.  Jean Maury exploited the site and created a museum, of which he became the  curator. He also decided to stop the excavation campaign to preserve the site  for future generations.

In the 80s, Alain Roussot, the curator of the Museum of Aquitaine, started  clearing the section, which enabled the detailed recording and study of its  stratigraphy: the first 4 layers described were subdivided into 27 different  layers. One part of layer 15 was then carbon dated at 13,850 years.

Part of the Marseilles shelter still remains to be searched.

The site has been classified as a Historical Monument.

Magdalenians were Homosapiens or Cro-Magnon men offering minor differences  with today’s men. Some of them have been carefully buried, as for example in  Laugerie Basse.

The last major drop in temperatures in the climatic history of the Earth,  also called last “ice era”, took place during the Superior Paleolithic period,  and during the coldest periods the temperature could -on a yearly average- be 4  to 5°c colder than today. Such a difference has a marked influence on both the  flora and the fauna.

The Vézère valley used to host animal species that are typical of cold  climates and that have now disappeared, such as the mammoth or the hairy rhino,  and also species that still live today under the polar circle, such as the musk  ox, the polar fox or the reindeer. Reindeers were the most hunted of all during  Magdalenian times in Périgord. Excavation campaigns in Laugerie Basse have  revealed that 90% of all bones discovered were reindeer bones.

Dead animals were fully utilized: flesh and fat were consumed, the skin was  used for clothing or building huts, bones and antlers were turned into needles,  harpoons, assegais or works of art.

The Magdalenians were not only great hunters, but also fishermen fishing  trout, salmons, pikes, and creating for all these activities quite  sophisticated weapons such as assegais, propellers, etc.

The two sites are 150 meters from one another.

The Prehistoric Shelter of Laugerie Basse : : Free or guided  visits in French or in English. Guide books are available in German, Dutch,  Italian or Spanish. The tour lasts 45 minutes. The shelter is accessible  to disabled persons. Dogs are allowed. Open from Easter to October

Ferme de Tayac is just a 2 min. drive or a 10 min walk to Laugerie Basse – www.fermedetayac.com