Halfway between les Eyzies and Montignac-Lascaux, in the  Vézère Valley rises the high cliff of La Roque St Christophe.

This wall of limestone one kilometer long and eighty meters high is pierced with a hundred rock shelters and long overhead terraces.

These natural cavities were occupied by man in prehistoric times. Later on they were altered and became a fortress and a city in the Middle Ages. The visit of la Roque St Christophe gives you a clear idea of the lifestyle of our troglodyte ancestors over thousands of years. Here you will discover the mark that these men left on the rock, as well as a museum of civil engineering machines reconstructed to pay tribute to the great medieval builders. 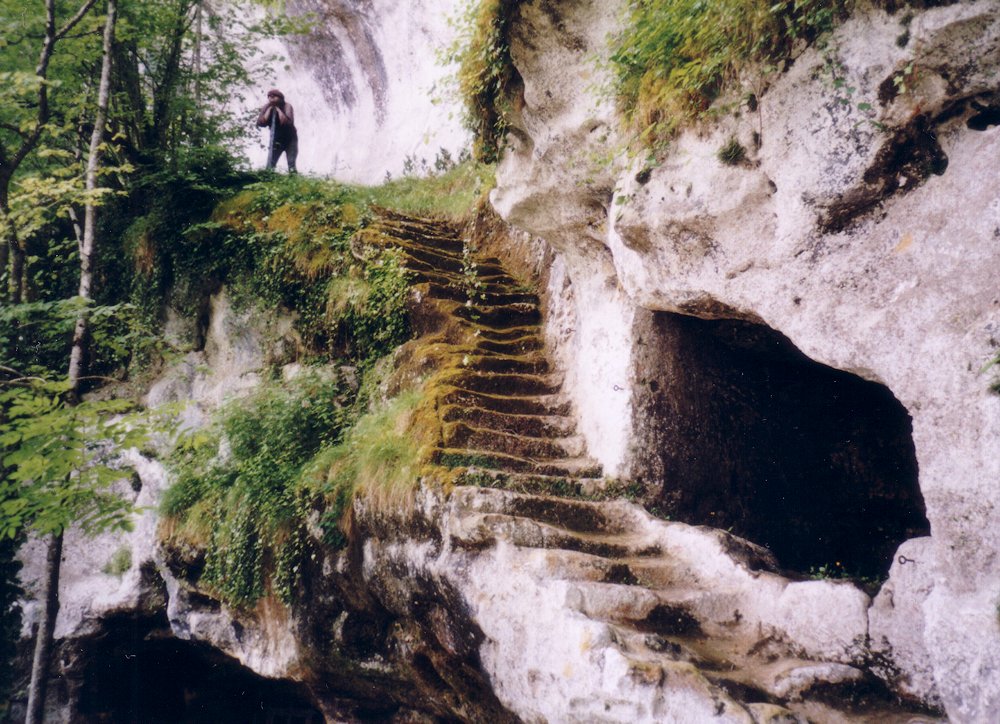 The cave system at La Roque-Saint-Christophe is a large prehistoric settlement complex situated about 9 km north of Les Eyzies, on the south bank of the Vezere River, in a very scenic and attractive location. La Roque St Christophe is the largest settlement of its type in Europe.

There is an extensive series of caves that have been carved out of the soft limestone cliff, initially by the action of the river then with further excavations by prehistoric man.

The cliff is almost a kilometre in length and 80 metres high and contained an entire prehistoric village above the river itself. It was approximately 55,000 years ago that man first started to inhabit these natural caves.

It was from the 6th – 16th centuries that the cliff also became developed as a village, with numerous buildings and fortifications backing onto the cliff. It seems likely that the village was occupied continuously during this entire period, until it was finally abandoned in 1588 during the Wars of Religion.

When you visit La Roque-Saint-Christophe you can now see numerous remnants of the dwellings that once covered this section of the cliff, and the steps and passages that linked the buildings. The caves often had front walls added to make the accommodation more sheltered and safer from attack.

There are also various reconstructions at the site, showing the dwellings as they would have been such as the kitchen utensils and sleeping arrangements, the types of tools used during their construction, and explaining the way of life of the inhabitants. Many of the methods of construction are quite advanced, including winches to lift large rocks up the cliff face and scaffold structures allowing access to more of the cliff.

By the middle ages the ‘town’ included all the commerces that you would expect to find such as shops, areas for raising animals, a forge and a bread oven.

You can also learn the fascinating the history of the fort that was built up the cliff in the 10th century, and the treasure that was abandoned by the English that might just still be hidden somewhere in the cave system.