The caves of Proumeyssac are mainly one huge cavern and inside are some incredible collections of stalactites and stalagmites. From the ceiling hang four huge stalactite formations. These resemble, and are named after: a siren, a waterfall, a jellyfish and an octopus. From one of these water pours down adding to the pools of water on the floor below.

One edge of the cavern is a huge wall of stalactites, stalagmites and columns. These resemble a vast, magical organ and have led to the cavern being known as the ‘cathedral of crystal’.

Behind the ‘organ’ is a tunnel you can walk through and here you will see some bizarre triangular deposits. These are extremely rare.

To enter the cave you can walk down a tunnel or you can pay extra to be lowered down in a basket from the ceiling in the same way the caves first visitors had to enter. Original this was operated by a horse but is now an electrical winch. 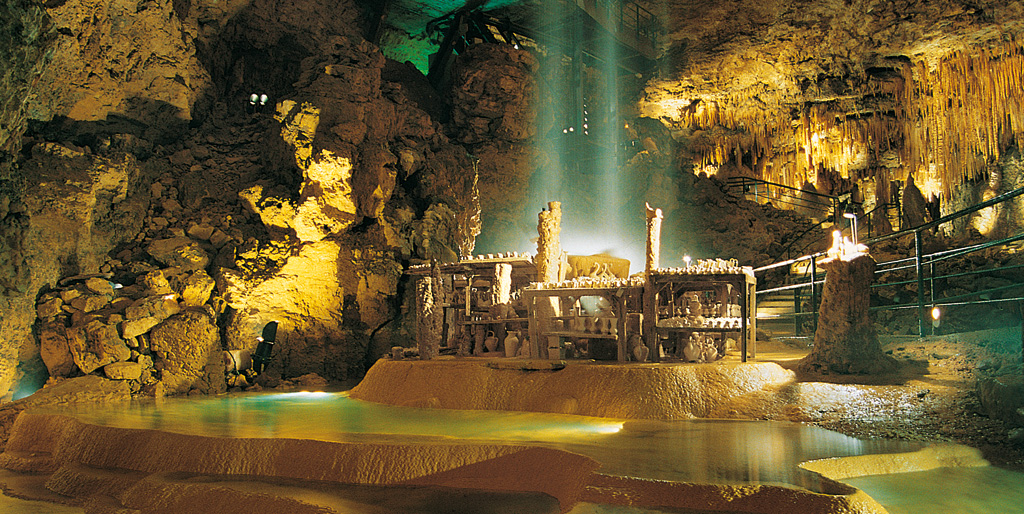 Most visitors arrive at a high level in the cave and the lights are turned off (this can be a bit alarming for small children). There is then a musical light show which illuminates the cavern and the different ‘sculptures’ as well as the descending basket lowering some of the braver visitors to the floor. The spectacle is very beautiful with the stalactites and the strangely ‘terrassed’ pools all lit up to great benefit.

A walk then takes you around the cavern to see close up the different formations.

Visitors are asked not to touch the stalactites as they are fragile. Some are broken and this is apparently partly due to early visitors who took souvenirs and partly due to earthquakes which took place during the course of the caves development.

HISTORY OF THE GOUFFRE DE PROUMEYSSAC

Before the existence of the Gouffre de Proumeyssac was known there were already legends surrounding the ‘Trou du diable’, the ‘devil’s hole’. The hole at the top of the cave, through which the basket is lowered, was known to the locals. In the winter the hole emits a mist in the same way that rivers do on a cold day in winter, this was thought to be smoke from the fires of hell by the locals. Also the whole was used as a general tipping site for old rubbish, dead animals etc. The stench from this added to the myth. Nearby is a route that was used by wealthy travellers and therefore also by robbers. The whole proved to be a good dumping ground for dead bodies and these disappearing travellers also added to the area’s reputation and the whole being seen as a gateway to hell.
It wasn’t until 1907 that the first tentative moves were made to explore the hole and the cavern was discovered. Tourism developed in 1924 with visitors being let down into the cave (now cleaned out including the bodies!) by the basket lowered by a horse. It re-opened after the war and the horse was replaced by electricity Then in 1956 a tunnel was built providing the easy access today’s visitors enjoy.

The Gouffre de Proumeyssac is situated at Le Bugue.

Guided visits take about 45 minutes and in May to August the caves are open all day including lunchtime.

Caves are about 14° inside so bring something warm to wear. Headphones are available for a commentary in English.

There is a café, a shop, and a play area for children.