as of January 2018 it is no longer possible to buy tickets in advance for Font de Gaume, Les Combarelles and Abri Cap Blanc. Each cave has its own quota of available tickets, and all of these will be sold on a first-come-first-served basis on the day when the ticket office opens at 9:30 am each day except Saturday (when the caves are closed to the public).

Located in Les Eyzies, on the Sarlat road, Font de Gaume Cave is a showpiece of Magdalenian engravings and paintings from around 14 000 BC. The flints (chisels, scrapers, blades) and other things found in the cave during the excavations testify to a continual occupation since the Mousterian age, or the age of the Neanderthals.

The ticket office opens at 9.30, and you will have to be there well ahead to get a ticket for that day.

Discovered in 1901 by D. Peyrony, the Cave, 130 m long, contains about 250 paintings. The visitor can only see 30 of them, the most beautiful ones and the best preserved. After 60 m underground, the “Rubicon” is the beginning of the decorated part of the cave, with red dots on the left wall. These caves were not used as dwellings, they were shrines, according to A. Leroi-Gourhan The Grotte de Font-de-Gaume is famous for its cave paintings from the Magdalénien period. It is entrance is 20 m above the valley floor of the Beune valley, at the lower edege of a huge limestone rock.

There are many polychrome paintings and some engravings. The 240 figures show 80 bisons, which are the dominant motive. Most other pictures are also animals, 40 mammoths, 23 horses, 17 reindeers and deer, eight primitive cow, four goats, a wolf, a bear, and two rhinoceroses. More interesting, but less frequent, are four hand outlines and 19 geometric figures. 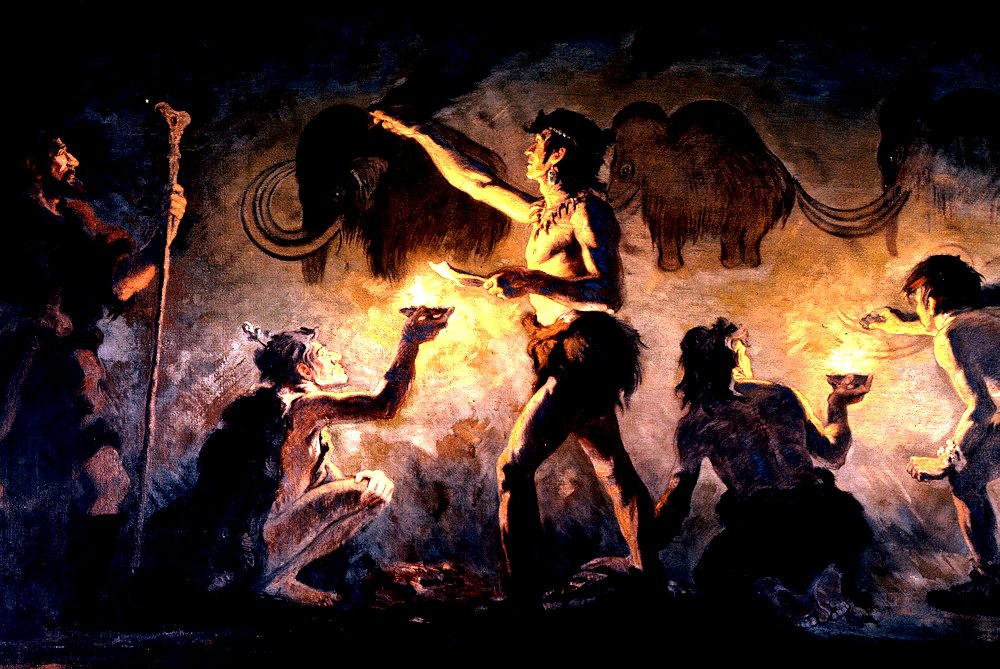 The cave was first settled by Stone Age people during the last Ice Age – about 25,000 BC – when the Dordogne was the domain of roaming bison, reindeer and mammoths. The cave mouth is no more than a fissure concealed by rocks and trees above a small lush valley, while inside, it’s a narrow twisting passage of irregular height in which you quickly lose your bearings in the dark. The first painting you see is a frieze of bison, at about eye level: reddish-brown in colour, massive, full of movement, and very far from the primitive representations you might expect. Further on a horse stands with one hoof slightly raised, resting. But the most miraculous of all is a frieze of five bison discovered in 1966 during cleaning operations. The colour, remarkably sharp and vivid, is preserved by a protective layer of calcite. Shading under the belly and down the thighs is used to give three-dimensionality with a sophistication that seems utterly modern. Another panel consists of superimposed drawings, a fairly common phenomenon in cave painting, sometimes the result of work by successive generations, but here an obviously deliberate technique. A reindeer in the foreground shares legs with a large bison behind to indicate perspective.

Location: Les Eyzies-de-Tayac. 1km from the centre of Les Eyzies.

Guided tours : every 40min. – for conservation reasons, access limited to 80 person/day
No reservation available, all the tickets are sold at the entrance every day for the day.