The Beune Valley has been occupied for a very long time. Around Commarque, prehistoric man has left numerous traces of his passage. Not far from the site at Commarque, Paleolithic man left two female statuettes known as the Venus of Sireuil and the Venus of Laussel. On the other side of the valley, in the shelter at Cap Blanc, one can admire a frieze of prehistoric sculptures. Under Commarque Castle there is a cave where Magdalenian man carved animals on the wall, notably a very beautiful life-sized horse (not open to the public). 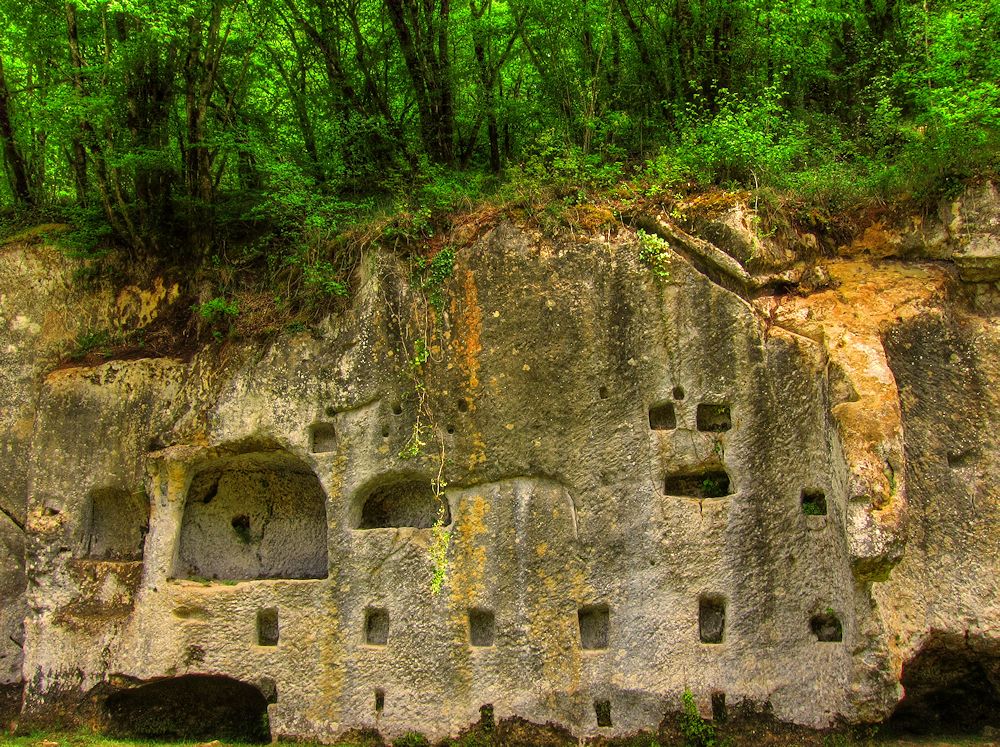 The Uncertain Origins of Commarque

The most reasonable hypothesis would be to attribute the founding of a keep at Commarque to one of the two abbots of the same name who succeeded the abbey see of Sarlat during the last third of the XIIth century: Garin (1169-1181) or Randolph de Commarque (1195-1201). The building of a tower allowed them to contain the ambitions of their vassals the Beynacs, with whom they had a relationship of conflict. It was a member of their family who obtained its guard. The first Lord of Commarque, thus, was a “milites castri” or knight, who followed orders from the Abbey of Sarlat. In the XIIth century, a concentration of population existed there, made up of a keep with living quarters, a chapel and house towers: it was the castrum of Commarque.

The Beynacs, Lords of Commarque

There is mention of Commarque in archive documents from 1255 onwards. Maynard de Beynac became the lord of the château. The house towers were held by the lineages of lesser nobles, the names of several of which are known: the Commarque, the Cendrieux, the Gondrix, the La Chapelle… Each house tower had an enclosure, its own access, and ditches. The lord and knights fought over the rights of justice, land and other property.

The Rise of the Beynacs

During the course of the XIVth century, two major lineages had the first regrouping of lands by successive acquisitions. The Beynacs succeeded in constituting a veritable castellany around Commarque when they retook the rights of Marquay and of Sireuil from the Cendrieux and imposed their suzerainty on the den of Laussel. The Commarques took back the lands and rights from the descendants of the other knights, either by buying them or through alliances. From the middle of the XIVth century, the entire lower courtyard had become the noble house of the Commarques: they now disposed of a defensive parameter largely exceeding that of the Château of Beynac.

The Patrimony of the Beynacs Combined

During the Hundred Years’ War, the Beynacs stayed faithful defenders of the throne of France. Pons de Beynac enjoyed several political favors: he was among the clients of Beaufort-Turenne, of the Avignon papacy and of the Anjou party. The extension of Commarque Castle between 1370 and 1380 has been attributed to him. He undertook heightening the keep and the curtain wall, and had the crown of machicolations built which was inspired by the Palace of the Popes in Avignons.