The Château de Castelnaud, officially listed as a Historic Building in 1966, stands high over the Dordogne valley, with magnificent views of the châteaux of Beynac and Marqueyssac and the medieval village of La Roque Gageac.

Open to the public since 1985, this one-time fortress is now given over entirely to displaying the art of warfare in the Middle Ages. Inside, there is a unique private collection of arms and armours, and alos some furniture from the period; outside, you will find reconstructions of war machines, such as siege catapults, in actual size. These are reinforced by models and videos, explaining a medieval château’s different methods of attack and defense.
The château, owned by the Rossillon family, has been brought back to life by three large-scale restoration programs. Today, it attracts more than 250,000 visitors a year, of whom 20,000 are schoolchildren. 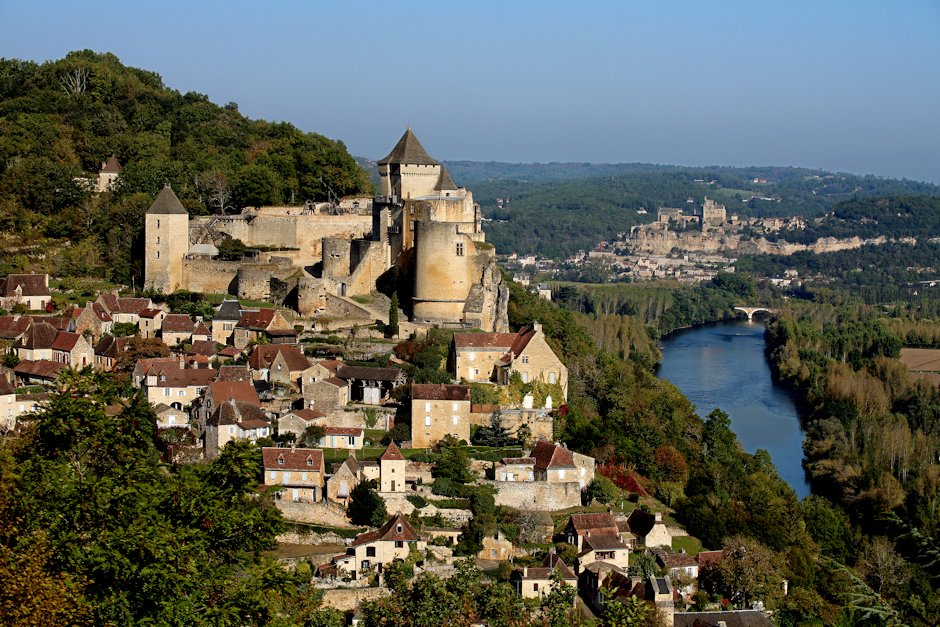 Castelnaud – or rather, Castelnau, meaning the “new castle” – was certainly founded in the 12th century.  At the beginning of the 13th century, its lordly owner was Bernard de Casnac, a supporter of the Cathars (also known as the Albigensians), whose dualist religious beliefs led to them being castigated as “heretics”. In 1214, the castle was seized by Simon de Montfort, a northern baron who had been sent down to crush the Cathar “heresy”. Subsequently, the fortress was rebuilt. Its keep and the courtine, or “curtain wall (the area between two bastions), date from this period.

During the Hundred Years War, the château was often in English hands. The French finally took it in 1442, after a siege ordered by France’s King Charles VII. Once hostilities ended, it was restored to the Caumont family, who had owned it since 1368. They strengthened its defensive capabilities: canon ports were installed in the lower wall and the new barbican, and the artillery tower was erected.
A large new main building was also erected, in order to make the medieval fortress more comfortable. Nevertheless, the Caumonts quit Castelnaud to live in their pleasanter new château at Milandes.

During France’s bitter Wars of Religion (1562-98), the castle was left in the hands of Captain Geoffroy de Vivans, a Protestant soldier nicknamed “The Battler”, who was born at Castelnaud.  He was so feared that it was never attacked in all that time.

In the 17th century, the château was rarely inhabited. Abandoned after the French Revolution (1789), it fell more and more into disrepair and, in the 19th century, even served as a stone quarry.

In 1966, it was listed officially as a Historic Building and has since been brought back to life through a series of outstanding restoration programs. Its “Museum of Medieval Warfare” was founded in 1985.

Looking for accommodation near Castelnaud?