Beynac, linked firmly to its past, as to the rock on which it is built, is a magnificent village which has managed to retain all of its medieval charm. Classed among the most beautiful villages in France, the visitor must engage the paved and steep little lanes, taking the time-worn stone stairways to be able to admire the unhindered view of the Dordogne valley.

Once on-high, climb again, the chateau is waiting to welcome you.

The Château de Beynac is one of the best preserved and most well-known in the region.

This Middle Ages construction, with its austere appearance, is perched on top of a limestone cliff, dominating the town and the north bank of the Dordogne River. 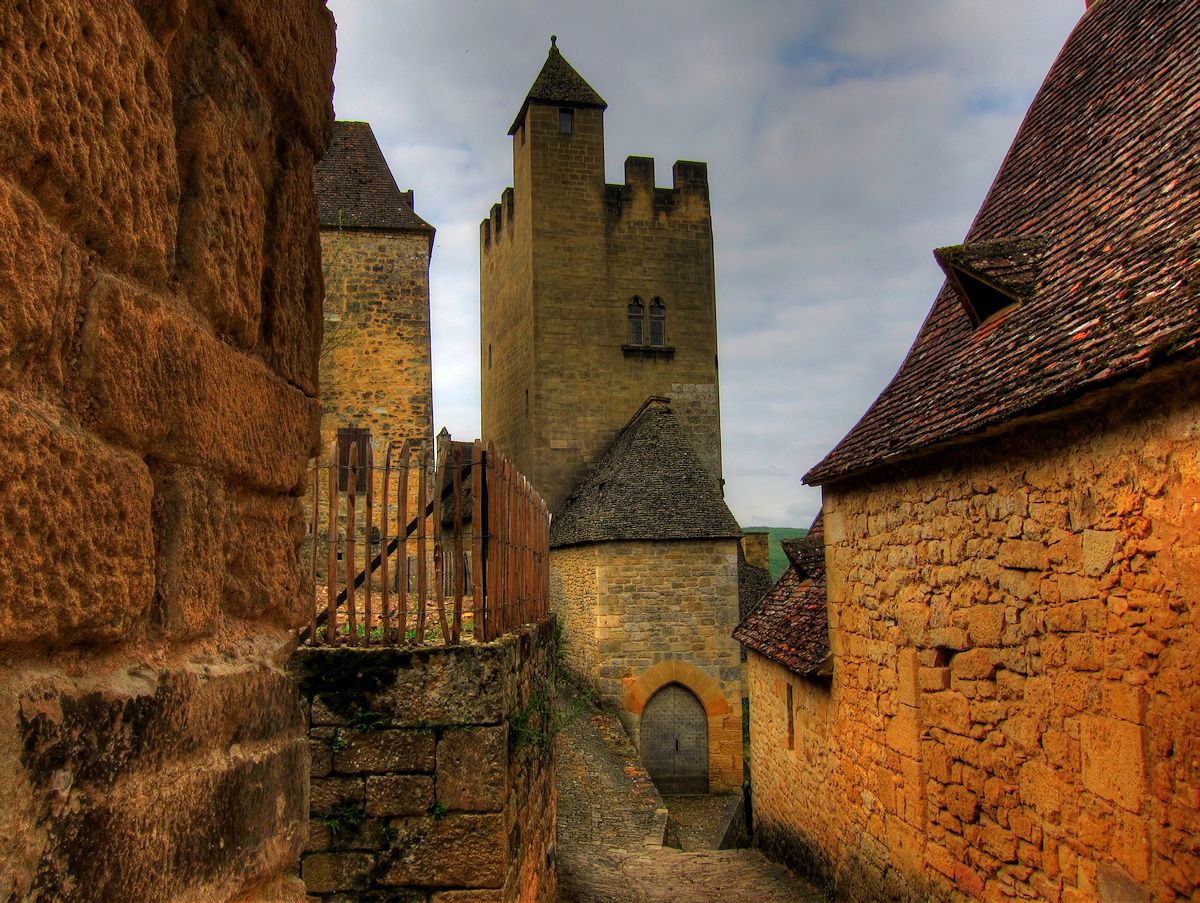 The castle was built from the 12th century by the barons of Beynac (one of the four baronies of Périgord) to close the valley. The sheer cliff face being sufficient to discourage any assault from that side, the defences were built up on the plateau: double crenellated walls, double moats, one of which was a deepened natural ravine, double barbican.

The oldest part of the castle is a large, square-shaped, Romanesque keep with vertical sides and few openings, held together with attached watch towers and equipped with a narrow spiral staircase terminating on a crenellated terrace. To one side, a residence of the same period is attached; it was remodelled and enlarged in the 16th and 17th centuries. On the other side is a partly 14th century residence side-by-side with a courtyard and a square plan staircase serving the 17th century apartments. The apartments have kept their woodwork and a painted ceiling from the 17th century. The Salle des États (States’ Hall) has a Renaissance sculptured fireplace and leads into a small oratory entirely covered with 15th century frescoes, included a Pietà, a Saint Christopher, and a Last Supper in which Saint Martial (first bishop of Limoges) is the maître d’hôtel.

At the time of the Hundred Years’ War, the fortress at Beynac was in French hands. The Dordogne was the border between France and England. Not far away, on the opposite bank of the river, the Château de Castelnau was held by the English. The Dordogne region was the theatre of numerous struggles for influence, rivalries and occasionally battles between the English and French supporters. However, the castles fell more often through ruse and intrigue rather than by direct assault, because the armies needed to take these castles were extremely costly: only the richest nobles and kings could procure them.

Looking for accommodation near Beynac ?